I want to start by saying that my house doesn’t lose power (knocks on wood). I think I’m on the same line as the local hospital, so if we get a blip, it just that, a blip. I had a generator, but I didn’t use it, nor thought about it until a good family friend said I should create a power inlet.

What is a power inlet?

A power inlet is a hookup that ties into your main panel box, so you can run things off your panel box. Think of an outlet to your house that supplies power to the box.

Why not just run a wire?

That was my thought, but things like the hot water heater or the steam boiler are directly wired to the panel box. If you figure that out, then do the whole thing. Once I figured out how easy it was (See below), I decided that I should just do it.

First off was a generator. I was ready to use gas, until Costco magically started selling a natural gas generator. I recently ran a natural gas BBQ, and the line was right there. All I had to do was get a long enough hose, and just switch the line from the BBQ to the generator when needed. I chose natural gas over gas because I’ll never have to refill the gas. Natural gas comes into my house, so underground gas lines in my opinion are way superior than having to refill gas.

Here is the generator 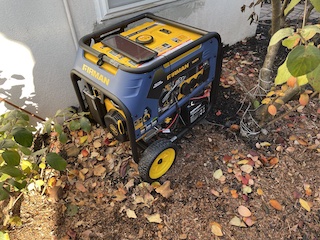 Second was the inlet. The generator has a 50amp power rating (I hope I’m saying that right). I had the luck of buying this after Hurricane Isiah, so even after weeks of looking, everything was out. Here is the link. The storm wasn’t that hard hitting to my area, however, all the generator products were sold out two months after. 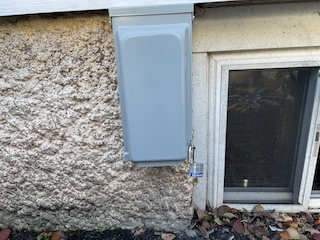 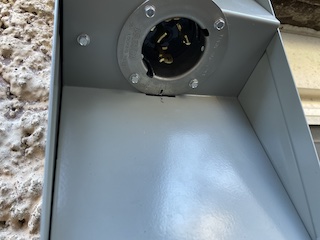 Third, was the wire to the panel box. I chose safety over cost. I needed an outdoor rated (even though it wasn’t outdoors) 2AG wire. 50 amps is a lot. I could have gone with 30 amps, but my generator afforded me 50, so I might as well do it. Go to Home Depot or Lowes, and they have 2AG wire. 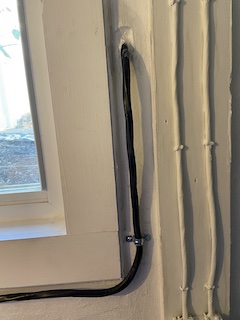 Fourth (optional), was a disconnect. My friend told me that this is purely for additional safety. It is an indoor way of cutting power quickly if you need to. I don’t have the link, but here is a picture of it: 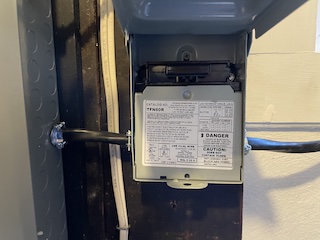 Fifth, and I stress the importance and legality, is the generator interlock. I’ll explain this later. You have to buy one that matches your system. This was mine. Link.

Sixth, were the wires. This is the natural gas wire, and 50 amp power wire.

Seventh, was the grounding apparatus including an 8 foot copper stick that you have to pound into the ground.

Finally, all the little eletrical bits and breakers. I’m not an electrician, so I’m not comfortable telling you specifically what you need. My friend has done these in the past, and told me what to get.

The interlock is a safety measure that prevents backfeeding into the grid. It is a piece of metal that doesn’t allow you to have the main power to the house on as well as the generator power. If both were on, you would electrify the wires back into where the linemen are working causing them to be electricuted. This is a building code, and I can’t stress enough how much you need it. I know they are expensive, and you can make your own. 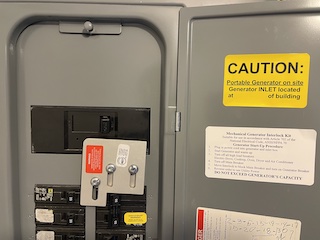 Where to Put This

As with all CO2 producing generators, you have to keep this outside and covered. The manual says at least 25 feet. I found some space behind the bushes that I can permanently keep this. If you have to wheel it out, figure all this out before you start.

You are running a 50 amp wire. You may want to at least start the process of maybe adding another breaker for a future electric car. In my case, I’ll just repeat the inlet process, but I’ll have to find a way to go under the pavers to the garage. I’m starting to plan this project.

Hooking this all up

I’m not going to tell you how to hook this all up. It isn’t hard, but get someone who knows what they are doing. 50 amps is very dangerous. I’ll tell you, it isn’t hard. The hardest part is installing the breaker at position 2 (you will almost certainly have to move another breaker).

The best way to do this is to have a sub panel box. You create a feed into another panel box with the mission critical power you want to run. In my case, the majority of my house is all natural gas, so my load can be handled by this generator. Also, just remember that you lost power. You need to only run mission critical things.

This also means your breakers have to be labled very well. That took me two days, and countless up and down stairs to verify all the breakers. I highly recommend doing this, you will be happy once you are done (but extremely tired).

In a power outage

Go back outside and connect the wire to the generator and power inlet.

Go back downstairs and turn on one by one each breaker that you need.

I’m glossing over many steps. I just wanted to document what I did. Overall it wasn’t a hard job, but I had help. A generac whole house generator will cost north of $15k. I did all of this for under $2k. Even hiring an electrician won’t be as bad as you think, especially if everything is centralized where you want it.

I have a feeling battery power to solar panel generators are the next thing. I’m not upset that I did this because I can use the 50amp inlet to charge an EV. However these battery power generators are supremely expensive at the moment. For $2-3k I have some piece of mind.